Bach and the Holy

Johann Sebastian Bach. 1685–1750. German composer of the Baroque period. We’ve all heard of him. Most of us are familiar with his music, though we may not be aware that we are. For example, Bach’s “Jesu, Joy of Man’s Desiring” is a gorgeous cantata that is widely played. You can enjoy it on YouTube — including in a lovely performance by Celtic Woman. Okay, so he’s famous, but what’s he doing in a blog on the Essentially Holy website?

Well, I want to talk a bit about Bach and his spirituality. 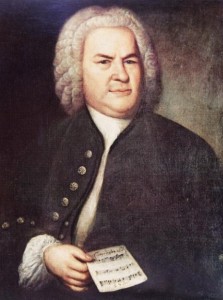 Bach summarizes his approach to music: “Music’s only purpose should be the glory of God and the recreation of the human spirit.” And then there’s the reaction to his work. For example, Peter Kreeft noted that he personally knows three ex-atheists who were swayed by the argument, “There is the music of Bach, therefore there must be a God.” Let’s explore both aspects of Bach’s music.

The Spirituality of Bach

Bach had a profound faith that informed his life in all its aspects. He made his living largely as a Church organist and composer of Church music. His cantatas (vocal works) number over 200, most of them composed specifically for Sunday service. In addition, he wrote several passions — for example, the magnificent St Matthew Passion — and the Mass in B minor.

Music scholar Alberto Basso writes that “The Mass in B minor is the consecration of a whole life…. This monumental work is a synthesis of every stylistic and technical contribution the Cantor of Leipzig made to music. But it is also the most astounding spiritual encounter between the worlds of Catholic glorification and the Lutheran cult of the cross.”

But Bach’s spirituality infuses all of his work, not just his sacred music. In effect, Bach composed as a prayer to God. Even little exercises he wrote for his children to play were approached as a spiritual and religious act.

Bach was a musical genius. He can’t teach us to compose with glorious depth and style as he did. But he can teach us to approach all our tasks as acts of worship. When we do, we imbue our work with love and with humility. And our lives are the better for it.

The Spirituality of Bach’s Music

I mentioned Bach’s Mass in B minor earlier. This work is a bit of a puzzle. Bach was a Lutheran, and his Church would never have celebrated a complete Mass. So why did he write this Mass, which is actually one of the greatest and most compelling works in all of music history? Did he write it for the sheer joy of it? The bliss of expressing his love of God in a complete — and sublime — service?

Whatever the answer, this Mass is ineffably beautiful. And deeply affecting.

Some years ago, back when I was a definite agnostic, I went for a long walk. The day was beautiful, sunny and bright and clear, neither too cold nor too hot. The sky was a deep shade of pure blue. It was early, so there was little traffic on the suburban streets I frequented.

I had my Walkman, and I had Bach’s Mass in B minor bursting from its confines. This magnificent music sounding gloriously in my ears. And I remember thinking, “There must be a God.”

How could there be such beauty? Such perfect bliss? I was moved — not just spiritually but even physically — by the magnificence of the music. The text is in German, but even without understanding the significance of the words, I was still moved to the very core of my being.

We all find the mystery of faith in our own way and our own medium. For me, it’s music. But what is your “sacred art”? Do you find God in the garden? In art or poetry? In a child’s laughter? I invite you to share in the comment box below. I’d love to hear from you.

Sign up for FREE In Search of Soul eBook!